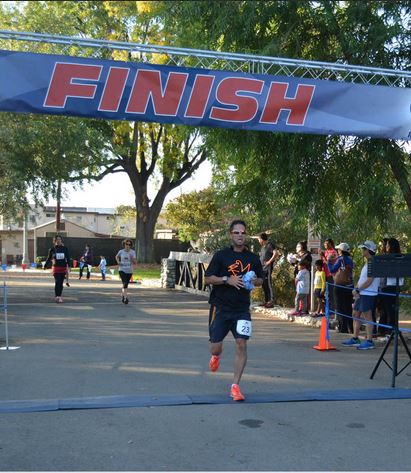 What up everyone, here is my race report from the 2017 San Gabriel Turkey Trot that I ran last Saturday!

I’ve been pretty much on a roll this year with being consistent with my running so I came into this one thinking I had a pretty good shot at my 10k personal record of 48:35. This is a small local race that my city puts on every year a Vincent Lugo Park which is only 1 mile from my house so I jogged down there as my warm up around 6:15am for the 7am start. This race also has a 5k and a 1k kids race also, the 10k race starts at the same time as the 5k fun run which means walkers so I made sure to get toward the front for this one. At a little after 7am the starter gun went off and off we went! This race starts with a nice uphill (boo) to make you feel like crap right off the bat, my legs felt like lead and I was thinking maybe this was not to be my day but I felt better after mile 1. Being a small race we became spread out pretty quickly and I was behind 2 guys most of the way. This race is 2 loops around the neighborhood, the hardest part is mile 3 when you get back to that hill for loop 2 and indeed mile 4 was the slowest of the race for me. I had a good hard pace going and was slowly reeling in the 2 guys ahead of me at mile 5 but it was starting to hurt. I thought about passing the 2 guys in front of me around mile 5.5 but hung back and waited until we got near the school which had a few turns before the finish line. When we got to the street the school was on I dropped the hammer and passed the 1st guy who was fading fast, I got to the 2nd guys about 100 yards later who looked surprised someone was passing him as I flew past him! I just had to stay in the pain cave for a couple of hundred yards which felt like death let me tell you! I pulled up to the finish line and what a surprise to see the clock have a “46” on it. I let out loud yell at the finish line as I beat my old time by 2 minutes which is a huge amount in a 10k.
I hung out for awhile after as that took a lot out of me and I had to still run the mile back home. Later back home I found out that I won the 45-49 age group! I knew there were a few guys my age I did not catch but they were all over 50, haha. Looks like I will have my work cut out for me next year. Anyways it’s back to the lab as training is going good so far. Thanks for reading this ramble.

Next race = Holiday Half 5k and Half Marathon, Dec 9th and 10th. 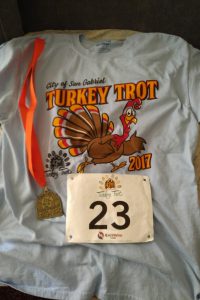