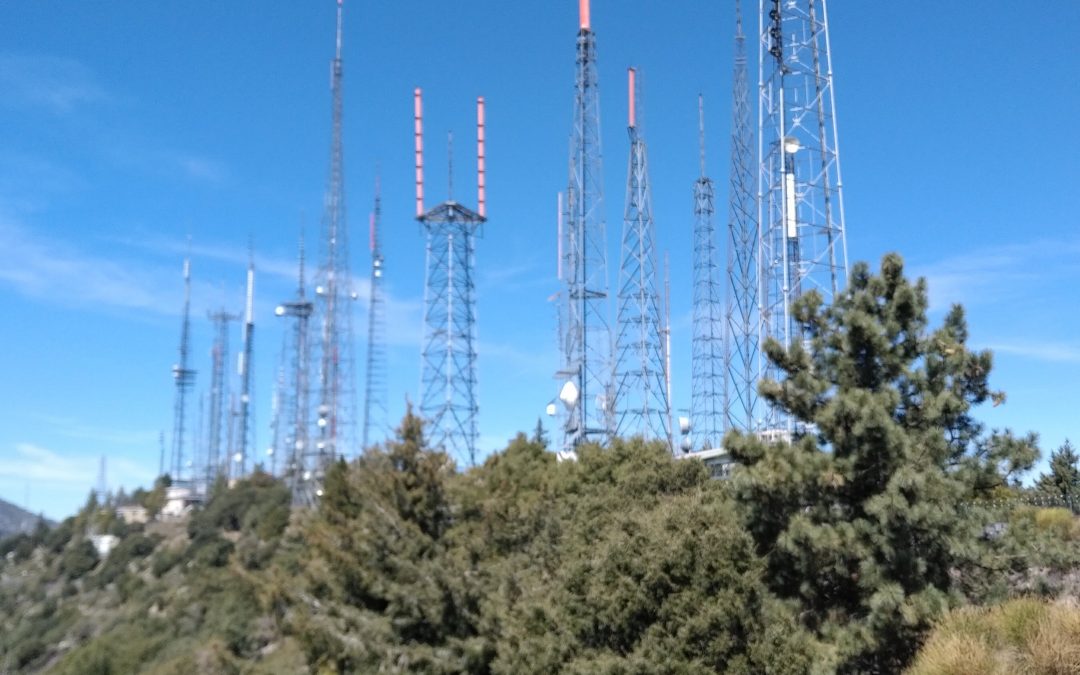 I have lived in the northwest San Gabriel valley since we moved to Altadena from LA in 1974 I think. The background of living here is the San Gabriel Mountains and the most prominent landmark is Mt Wilson. Not because of its size but because of all of the TV antennas that are on the top. No matter where I have lived since which have been Altadena, Rosemead, Pasadena and now San Gabriel it has always been there kind of like a backdrop to my life. Now there are many ways to get to Mt Wilson and I have done them all, Hike from Eaton Canyon via the Mt Wilson Toll Road, Hike from Sierra Madre on the Mt Wilson trail, Hike from Chantry Flats, Mountain bike ride from Altadena, Motorcycle ride via Angeles Crest, Car trips……….but one thing I never had done was go from my front door to Mt Wilson on foot.

Running in San Gabriel I get to look up and see Mt Wilson and the clear cut of the toll road on most clear days and I would think of how crazy it would be to go there and back from my place which is a block away from the San Gabriel mission. I did a guesstimate of how far it would be and came up with about 36 miles, now I only needed a reason to attempt it………

2018 is the year I turned 50 years old so I wanted to do a few big runs and hikes to celebrate so being a distance runner I figured running a 50 mile Ultra for 50 years kind of fit so I looked for a run that was close to my B-Day. The Leona Divide 50 miler fit the bill as it is only 2 weeks after my birthday. I was actually supposed to run this last year but injuries and lack of training combined with a 90 degree race day had me drop down to the 50k. I also had the LA Marathon planned as my big goal race so I would also use that training to also get me ready for LD50. Training went awesome as I ran the highest mileage ever but as life does sometimes, it all fell apart in the last 3 weeks leading up to the race. 1st I tweaked my ankle running my 1st 100 mile week with 3 weeks out. 2nd I ran a trail marathon the week after and further hurt my ankle. It was a rainy muddy race so my time was slow which meant I spent too much time on my feet, not the best plan for having a goal race 2 weeks later. I was fatigued during the last 2 weeks leading up to LA so I couldn’t do a proper taper which was strange……..Turns out I was slowly getting sick. I thought it was food poisoning at first but it turned out to be the flu. I dreams of LA were dashed as I couldn’t even get out of bed on race day. I was very depressed for the following week but know LD50 was coming so I had to get over the flu and get back at it.

It took an additional week to get over the flu where I did not run once which left me 3 weeks until race day. I needed to do one big time trail long run before this race to get halfway ready. I also needed a run to help me forget about the disappointment of not being able to run LA. I also needed an adventure to mark my 50th birthday. I looked up to Mt Wilson and knew it was time to go for it so on my birthday March 29th 2018 at 7am I locked in my running vest, took a deep breath and took the first steps on my crazy journey. 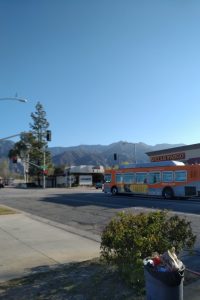 The first 8 miles are on the roads running through San Marino, Pasadena and then Altadena to get to Eaton Canyon where the Mt Wilson toll road starts. From there it is about 3 miles to the first landmark which would be Henniger flats campground. Now I’ve done this part many times before, If you turn around here it makes for a 20 mile long run back to SG. Today though I kept going. One mile above Henniger you get to the Idlehour trailhead and then you just keep going. The toll road after Idlehour is actually not that steep if you are a trail runner, maybe 400 ft of elevation gain per mile. I would run the flatter parts and hike the steep parts at first. Around the 13 mile point it started to become more hiking than running. By now I made it to the ridge that connects down to Bailey Canyon, the weather was pretty nice the views were awesome though a little hazy down it the city. 15 miles in I got to the Mt Wilson trail and was starting to feel the miles. The sign said it was about 2 more miles to Mt Wilson which pissed me off. I grinded the rest of the way up until I was finally below the towers! I made it!!!! 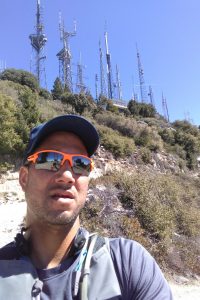 It was exactly 17 miles to the top and it took me 5 hours which is a little slower that I wanted to do it in, I walked up to the pavilion to take a lunch break but it was closed for remodeling so I found a nice bench to eat the burrito I brought. I went through my whole 70oz bladder as well as one soft flask with Gatorade so I made sure to refill both before the long trip back. I stayed at the top for about 15 minutes and then started the long trip down. For the way down I would run until my Garmin vibrated for the next mile at which point I took a minute walk break to re hydrate and to eat if needed. The shoes I wore which were fine for most of the trip started feeling too small now and my toes started hurting which slowed my pace some. At around the 22 mile point I was coming around a switch back and almost ran straight into a deer! It was a mom and her kid, we just started at each other for a few seconds and then I tried to take my phone out to get a pic but they both hopped off the trail and I was not able to get a good shot of them. I finally made it back to the city but had another 7 miles to go, by now my legs were shot and my toes really were complaining but I was able to do a slow jog for most of the way. 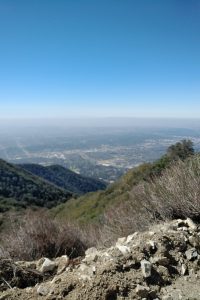 At 4pm on March 29th 2018 I stepped back on the grounds of the San Gabriel mission and finished the most epic journey of my running career. 8 hours 45 minute and 33 miles. As I write this 2 days later I am still very sore but happy. LD50 is going to be tough and I was hoping that I could of done Mt Wilson a little faster as there will be a 14 hour cut off for the race. Hopefully I will make it. 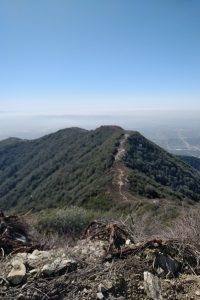 Driving around town now I take a look up to Mt Wilson and give it a nod of respect…..Mt Wilson nods back………………….