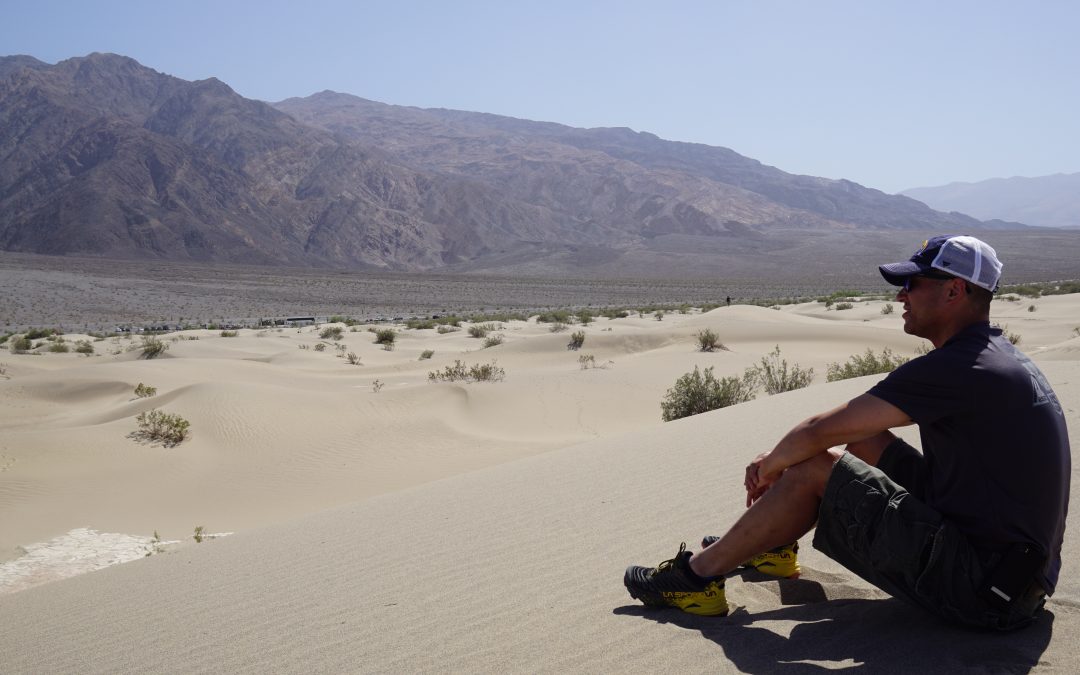 After the Leona Divide 50-mile Ultra I had the next week off of work to recover. After a couple of days, I was ok and was looking for something to do that would only take a day. I remembered when we went to Mt Whitney last year we met some folks that also were going to go to Death Valley to go to both the highest and lowest points in the lower 48 states. I have always wanted to check out DV so a quick google search led me to a web site One Cool Thing Every Weekend where they did a road trip to DV from LA. I texted my sister to see if she was interested and she was so we both met up at our parents’ house in Altadena to spend the night so we could get an early start. It was just like we were kids again, we even had pizza for dinner!

At 4:30 am we were out the door and on our way. We drove on the 210 FWY east and got on the 15 FWY north with our first stop being the desert town of Baker. We arrived at Baker at around 7:00am and gassed up the car for the next part of our adventure. We then took the 127 north and got our first taste of the real desert. It was a beautiful morning and before we knew it we arrived in Shoshone and took a left at highway 178. This led us into Death Valley! 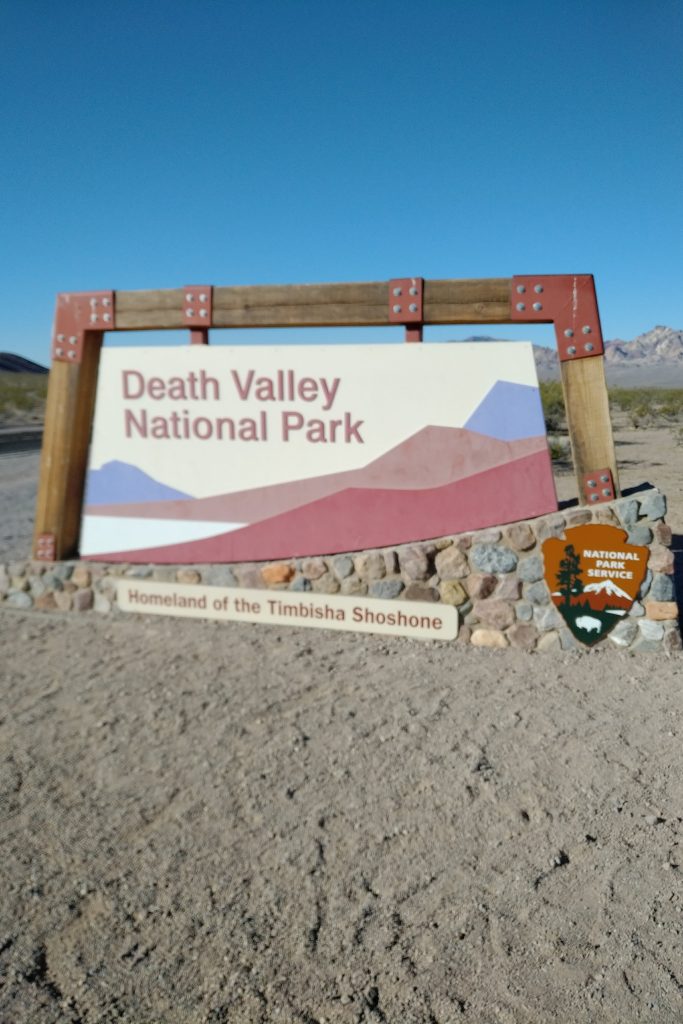 Our first stop after of course taking pictures as the “Welcome to Death Valley” sign was the Ashford Mill ruins which was a good spot to stop really quick for a break and take in the desert view. After this we headed up to Badwater which is the lowest point in North America. We walked the ½ mile out to the salt flats and took the mandatory tourist pictures and I even tasted the salt because that is what you do! It was pretty damn salty. 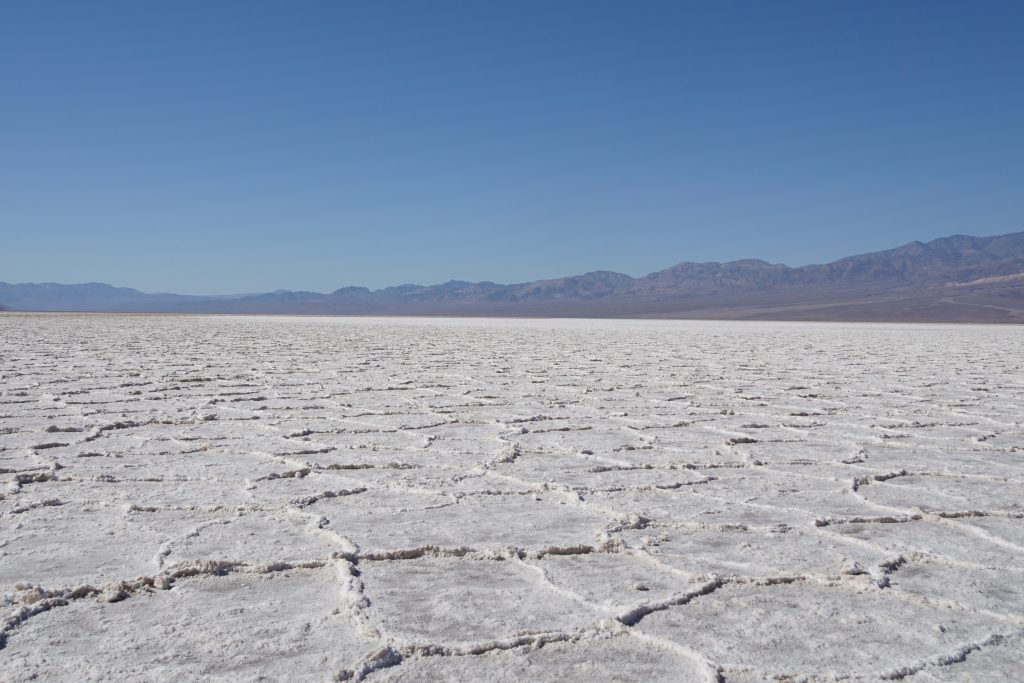 After Badwater is was a quick drive up to the Devil’s gold course. Well we thought it was quick but as luck would have it they were doing maintenance on the highway and had traffic stopped as they were only allowing one-way travel with an escort vehicle. After a 15-minute delay we were on our way. The Devil’s golf course would indeed be a sucky place to play golf as it is made on clumps of salty rock which could cut you up pretty good if you slipped on them so we were careful when checking them out. 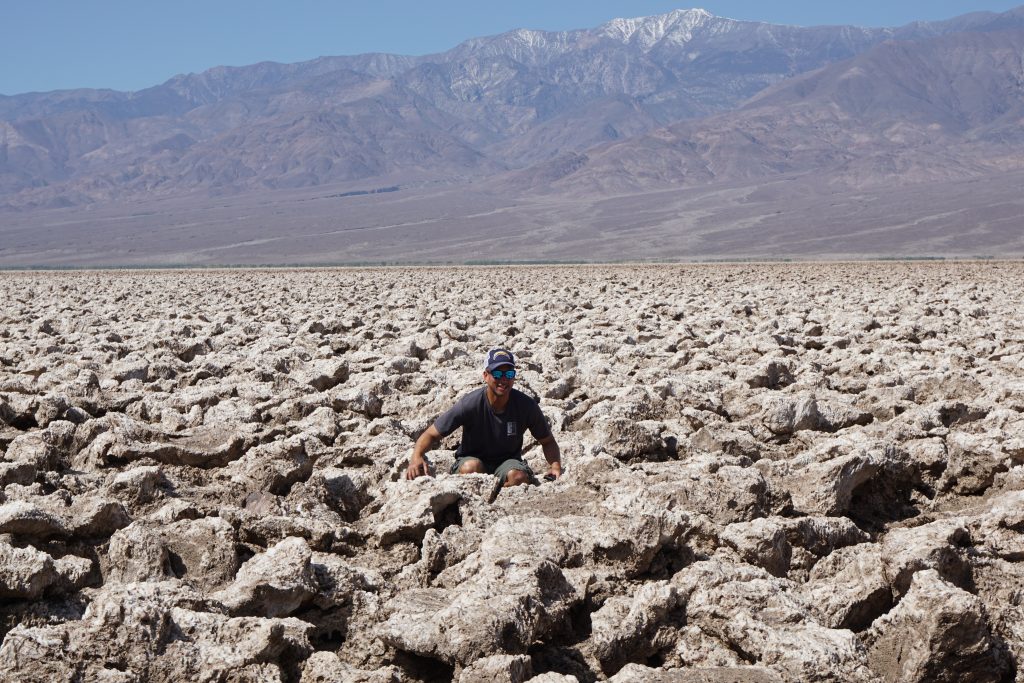 Next stop was a drive through the Artist Palette which had a lot of colorful rock formations and a pretty winding road where you got pretty close to the rocks. We stopped at a couple of places to get some pics and were on our way to the Furnace Creek visitor center. We arrived at the Visitor Center at 11:30am and purchased our vehicle pass as well as a few souvenirs and walked through the little tour exhibit. We didn’t take any pics by the thermometer as it was only about 80 degrees so that was not brag worthy. Believe it or not most tourists visit in July or August to see what extreme heat feels like. We brought leftover pizza for lunch so we ate in the parking lot and then started on our way to Ubehebe Crater. It took about an hour to get there. It was very windy, and we did a little hike to the baby Ubehebe crater which is next to the main one. There is a trail around the whole crater but since we were doing just a day trip skipped it. We even saw a couple of folks who hiked down to the bottom which was 500 feet and I was glad we didn’t do it because the climb out looked brutal. 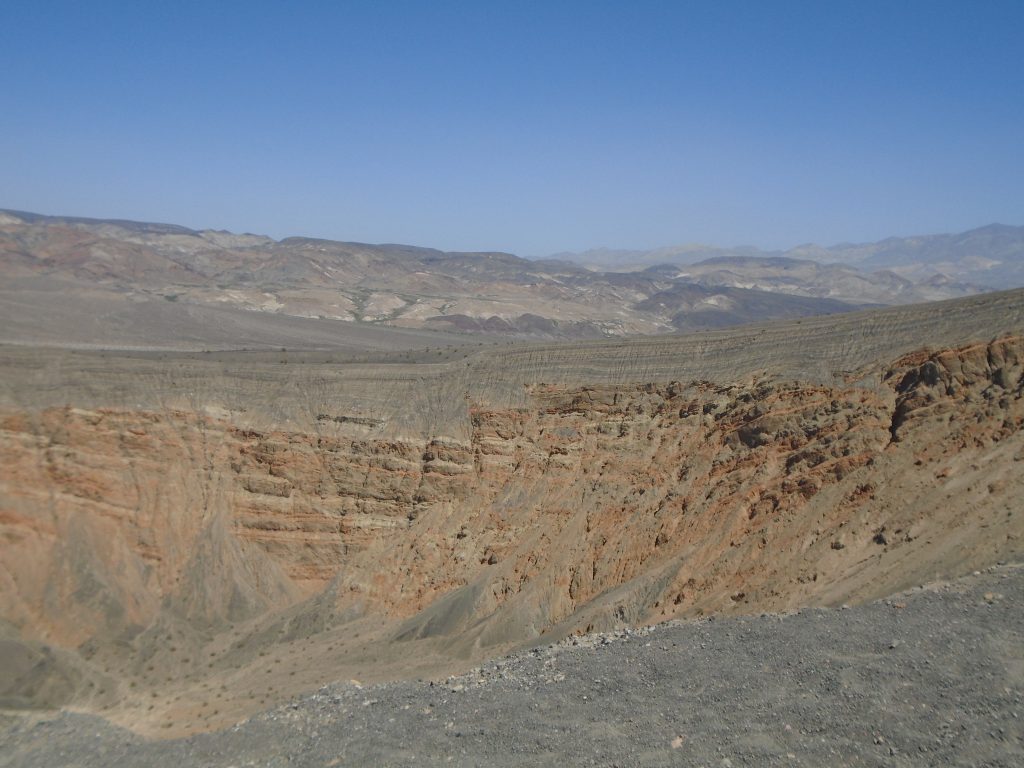 After coming back, the way we came we headed to Stovepipe Wells and stopped at the Mesquite Sand Dunes. We hiked out about ¼ mile and did our best “stranded in the desert” video’s and pictures. Once you hiked past the first set of dunes to where you couldn’t see the parking lot you could really imagine how it would be to be lost in the desert! After filling up the car again at Stovepipe we were on our way home. But not before driving through the Panamint mountain range via HWY 190. This road was very beautiful with wonderful views of the desert views and the mountains. I was glad to be driving this in the daytime though was it would be scary at night with all of the big drop offs. We stopped at Father Crawley’s vista point which provided another awesome view of the Panamint valley and mountains and then were on our way. Before we knew it we were at HWY 395 and on our way back home, we took the 14 to the 210 and arrived back at Mom and Dad’s at 7:30pm 15 hours and around 650 miles after we started. 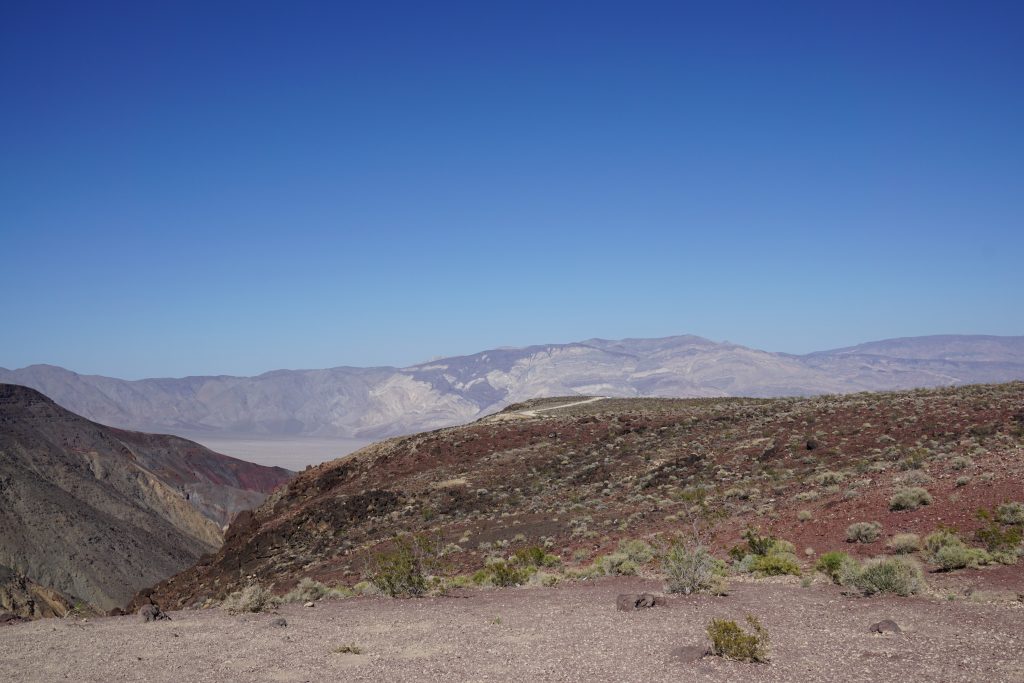 Death Valley was an awesome place to visit even if you only do a day trip like we did. A couple of other attractions there were closed (Dante’s view and Scotty’s castle). If they were open, we probably would have had to skip the crater. 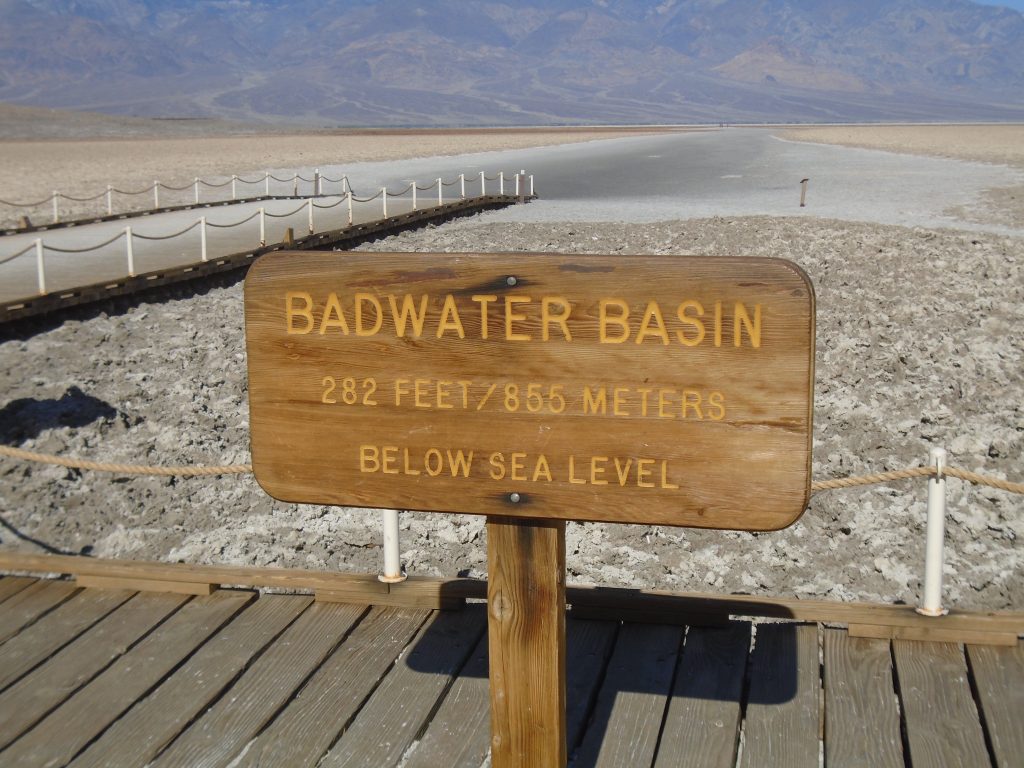 Now I can say I’ve been to the highest and lowest spots in California! 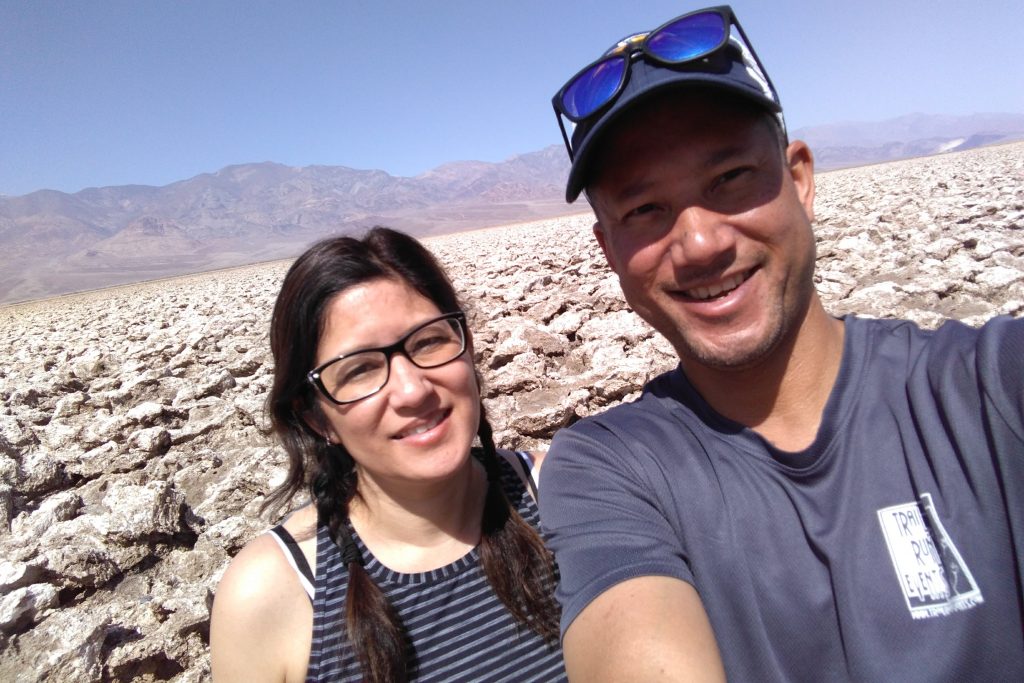