To find out how did I ended up in Arlington Virginia on a rainy morning at the Pentagon parking lot to run in the Marine Corps Marathon we have to go back to earlier this year…..

I just sent out one of my way too many race recaps when I got a reply from my cousin Ariana saying wouldn’t it be cool if I would come visit her back east and run with her in the Marine Corps Marathon which is one of the big ones in this country. The only problem was that it is so popular that you have to enter a lottery to gain entry. I said “what the hell” and I would enter it with her. A couple of weeks later I got an email from MCM saying I got in! Sadly, my cousin did not but they also have a 10k on the same day so she entered that. I told her of my conspiracy theory about these larger marathons where I think out of town folks have an advantage over locals since they would have to fly in and get a hotel and therefore provide an economic boost as this was the 2nd lottery that I have entered and been picked (Chicago being the other). Blame this one for me being here

So fast forward a few months and I found myself flying across the country for the very first time! After a very long day I found myself landing in Washington D.C.! After meeting up with Ariana and her daughter Savannah we when out to dinner to plan this mini vacation / run. Since this was my first time back east I flew in a couple of days early so I can do some tourist stuff so we planned to do the whole Washington D.C. monument thing which was pretty cool except when they kicked all of us out of viewing the White House up close! Surprisingly (or not) you cannot get within a quarter mile of that place and if too many folks gather around the D.C. PD will shoo you away. I was able to do a couple of cool runs along the Potomac river in the days leading up to the race. The weather was perfect but race day was looking wet. I packed accordingly but was hoping for the best. The day before was taken up by getting our bib and having lunch. One thing about the D.M.V. (what the locals call the D.C., Virginia, Maryland area) was that (and I kid you not) the traffic here might actually be worse than LA. This made getting around very time consuming and to top thing of the local baseball team the Washington Nationals made it to the World Series and they were at home during this same weekend so things were very exciting indeed. But this is a race report after all so let’s get back to the run! Shake out run on the Mt Vernon trail

Race morning was rainy just like they said so I put on my throw away jacket and walked the 4 blocks to the shuttles which would take us from Crystal City where I was staying to the start area. I arrived around 6am and hung out with the other folks waiting for the 8am start. The rain really started to pick up during this time, lucky for us the temps were in the 60’s which made it bearable. Before you knew it, it was time to assemble at the start and before you knew it we were on our way! The first few miles were through a town called Rosslyn and they were hilly. My goal for this run was just to have fun and enjoy the ride as I was very undertrained. I only managed a couple 13-mile-long runs and one 30k trail race as a buildup. After Rosslyn we went through what I consider the most beautiful part of the race where we ran along a parkway which dropped us down to the Potomac river and then over to Georgetown. The rain was mostly steady for the first 6 miles but it started to pick up as we hit Rock Creek Park which was around a 5 mile out and back section. As I hit the turnaround point at mile 8 the rain decided it had enough with this nice stuff and commenced to ratchet up to Monsoon level! I laughed at the folks trying to avoid puddles even though we were all soaking wet and showed them how it was done my not only running through them but also jumping in a few for good measure.

After we got out of Rock Creek Park we proceeded to the part of the race called “The Blue Mile” which will be something I will never forget. Around mile 12 there are pictures of Marines killed in action, a whole mile of them. I actually stopped and walked this section to read a few, you could see that some folks running knew some of the fallen as they would stop to take a picture with tears in their eyes. Not going to lie, I got a little misty eyed myself. To top that off after the pictures of the Marines there was a section with their family members standing on each side of the road holding American flags giving high fives to us runners in the now pouring rain. I cannot put into words how this section moved me so I won’t even try.

We now headed toward the mall and the rain finally let up and the sun actually came out! You would think that was a good thing but it made things quickly steamy as the temps were in the 70’s. This was around mile 16 which was also when I hit the wall of my lack of training. Luckily it was here that we ran past the Washington Monument and the capitol which meant I could make many stops to take pictures, ha-ha. Soon enough we were heading back to the finish, miles 19-21 we got to run on the freeway (do they call them that back east?) to Crystal city where we did a loop around the town and headed for the last few miles back to the Pentagon. Before I knew it I made it to mile 23, then 24, then 25 and finally 26! The Marines having the sense of humor they do decided that last .2 miles would be up hill so we all felt like mini Marines to conquer that and make it to the finish!

I was “awarded” my medal by a Marine and then started the second mini marathon which was the mile shuffle out of the race area to the gear check trucks to get all of the stuff I ended up not even using since now the weather was perfect. After a long shuttle ride back (it took us about 30min to go 3 miles) I was back at the hotel with another marathon in the books! I have to say that this was the best marathon course I’ve done due to the rivers, greenery, sights and events. Not to mention I got to hang out with my cousins (thanks Ariana and Savannah!) who I usually only see at Thanksgiving or Christmas! Even though it was my slowest road marathon to date it will always be among my favorites! The Hostesses with the mosteses

Hope you enjoyed this little recap 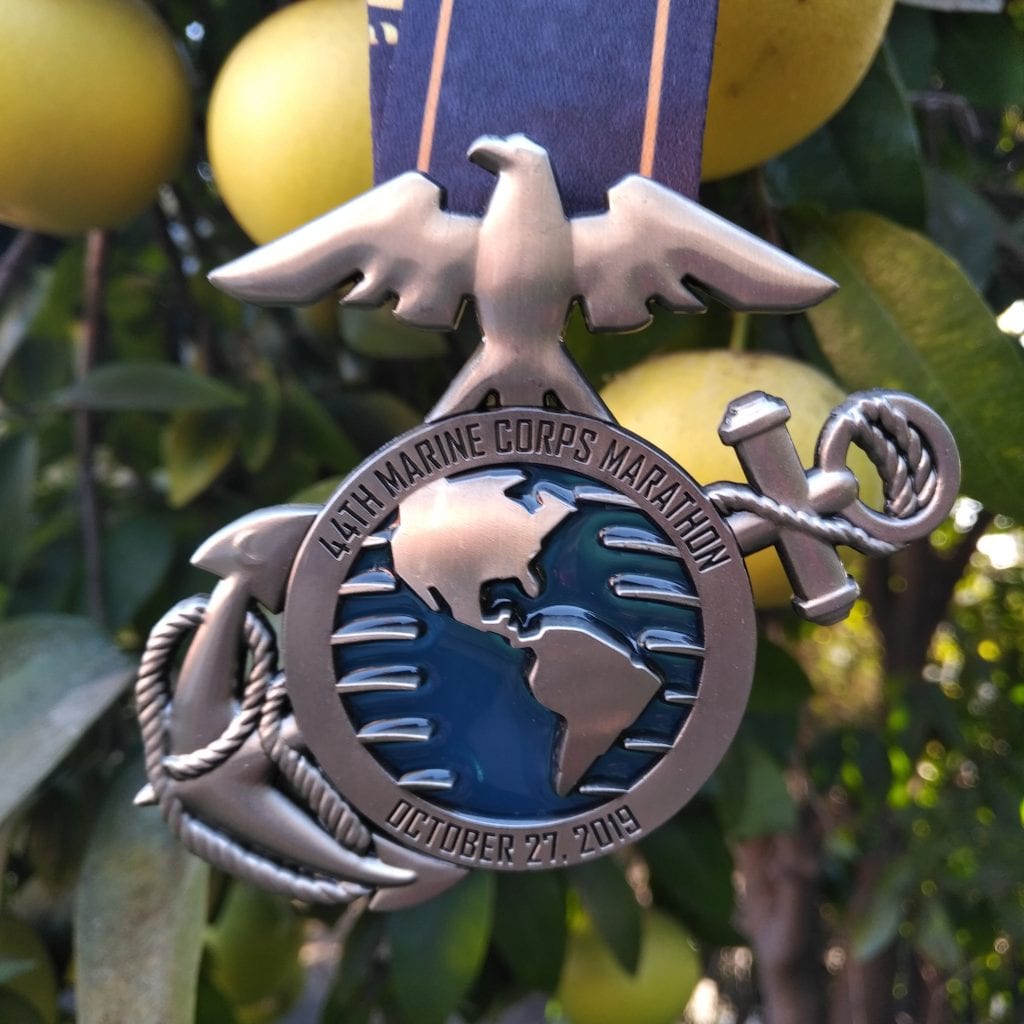