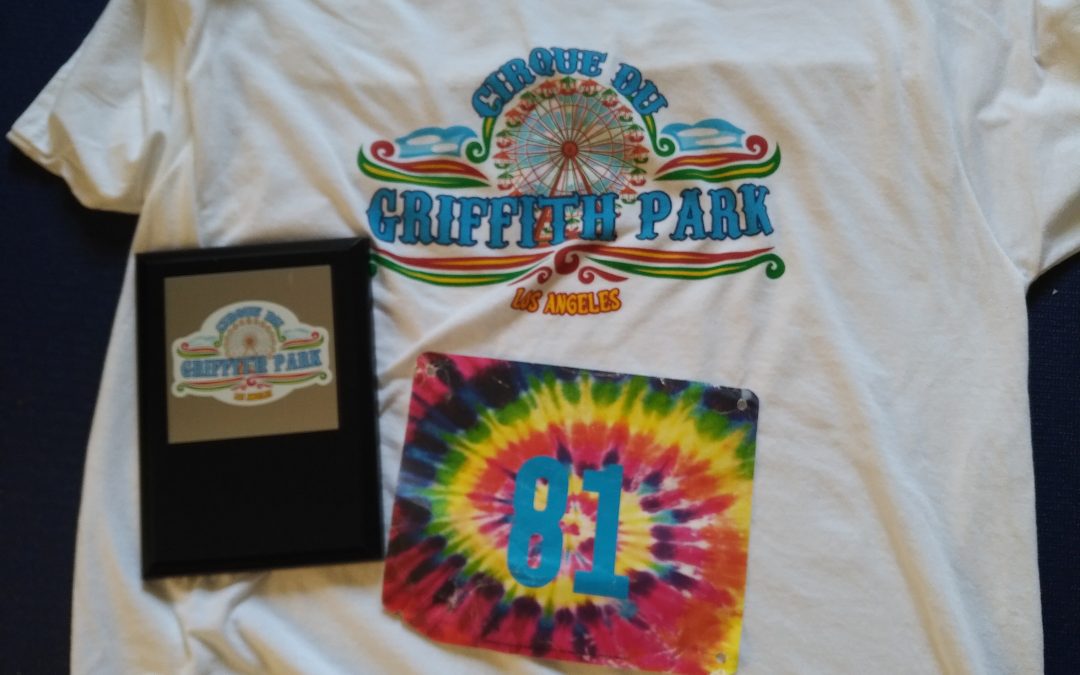 See Part 1 for how I prepared for this!

This is the 2nd year that the fine folks at Trail Run Events have put on the Cirque Du Griffith Park timed runs, last year they had a 12 hour and 6 hour run. This year they were able to get a permit to do the 24-hour event which is a pretty big deal since Griffith Park closes at 10pm (which also meant if you decided to stop running after 10pm you would have to stay the night anyways!) so it was cool that the city allowed this to happen. This also had the distinction of being the first 24-hour timed race being held in the city of LA. Being only 30 min from my place was also a big attraction for me to sign up for this one.

I pulled up to the Crystal Springs picnic area in Griffith Park around 6:30am with my go to breakfast of a sausage croissant from Jack In the Box and lugged all of my camp gear to the area where the 24 hours runners could set up their stuff. After setting up camp I hung out and talked to a few of the others running this, there was a young lady who camped next to me who remembered me from the prior year’s 12-hour event and it turns out that this was not her first time doing a 24 hour run so I asked her a bunch of questions on how it would be even though I knew for every person it would be different. About the weather, after weeks of nice overcast and cool temps race day was clear and the high was expected to get to 80 so we would have to deal with some heat during the day. 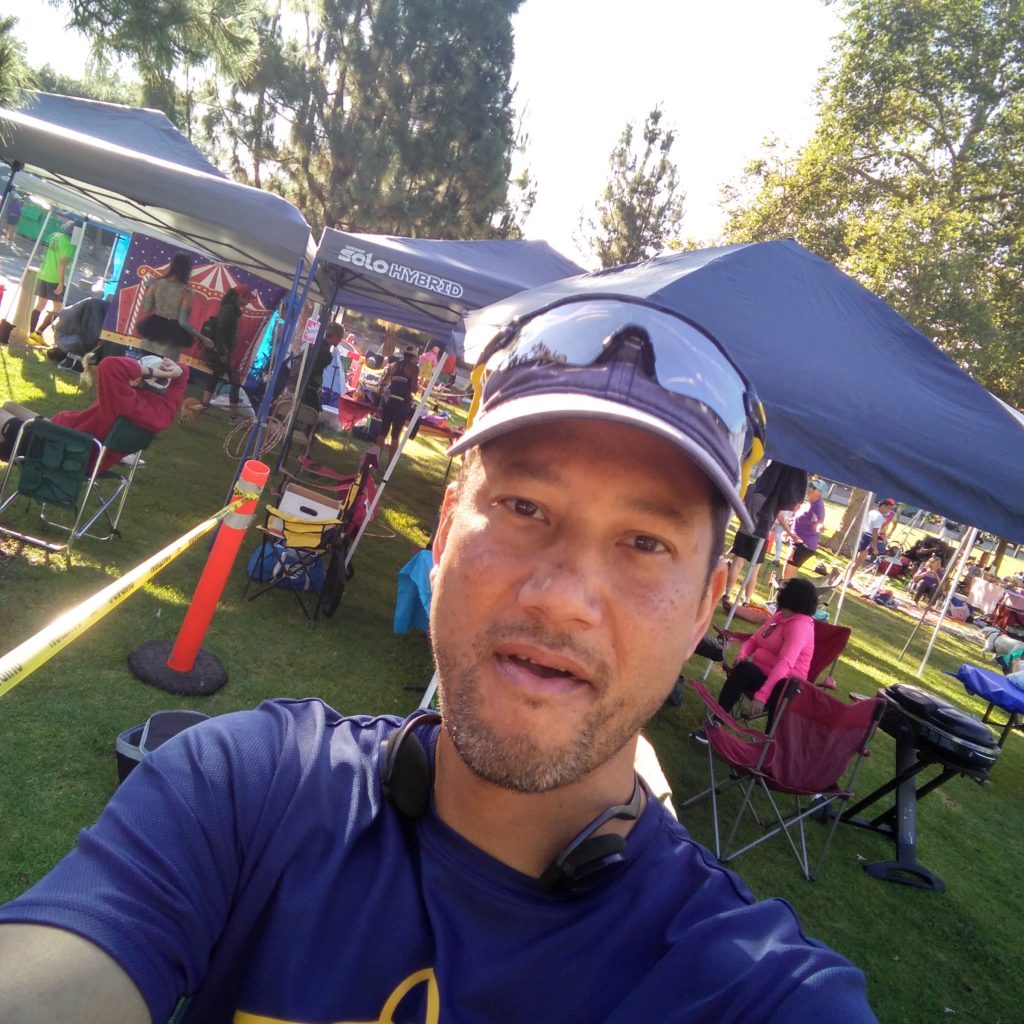 It looked like there were 150 or so others and the camp sites varied greatly, some folks who brought family had popups with tables, cots and BBQ’s. Others had tents, and still others had simple blankets with a couple of bags. We all milled around until about 10min til 8 when the race director Nancy called us over to the start. After she went over the rules and course info with us a simple countdown followed and we were on our way! 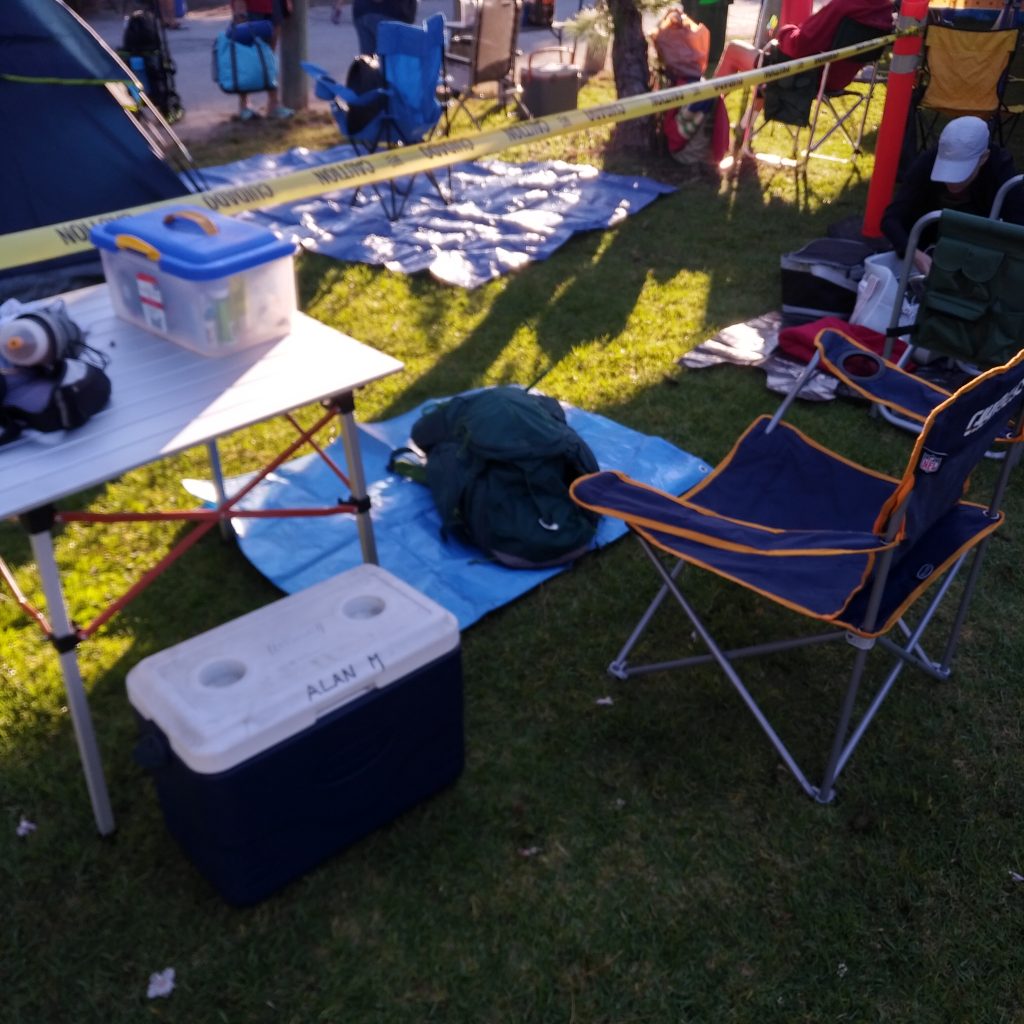 Unlike any race I have ever done I started this one by walking. Each loop is 2.43 miles with a couple of inclines that you would only notice if you were running for 24 hours. I got into a good run/walk rhythm for the 1st few laps but decided to be conservative due to my lack of training and slowed it down to around 40min laps which I felt I could do all day. My plan was to stop at camp or the aid station as few times as possible so I wore my hydration belt with one 20oz bottle and about 5 gels which would get me to the 6-hour mark. They had water/Gatorade/Tailwind and Ice at the start finish so you could stay on the course without refilling.

Round and round we went and soon enough it got warm so I stopped at my camp around the 3 hour mark and put on some sun sleeves for my arms and wrapped my ice bandana around my neck for later and set back out. I got into a good grove, just cruising along as I was not racing this and before you knew it 6 hours had past! For this run mentally I broke it into 4 6 hours sets so I pulled into camp to eat and grab a drink. I found out that chewing on fried chicken took a lot of work so I only ate half of a piece but the mashed potatoes were awesome. I refilled my gels and soon enough I was on my way again. 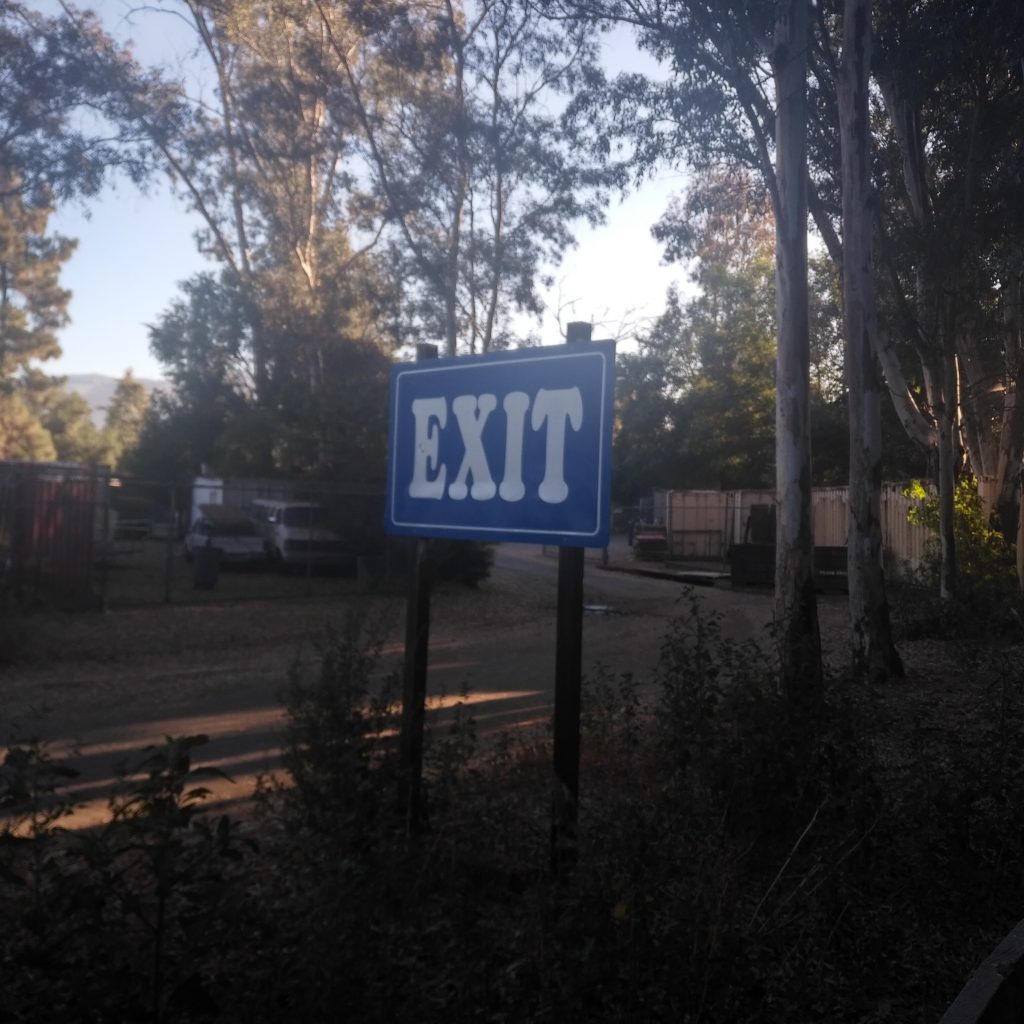 Around 9 hours in I felt my left shoe was tight which was strange as I was running in a model of shoe (LA Sportiva Wildcat) that I’ve used for the last 10 years and never had this issue with. I stopped real quick and loosened the shoestrings and that seemed to help but as the laps grew the tightness stayed so I decided at the 12 hour mark I would switch out the shoes. I hit 12 hours at 46 miles felling pretty good, It was a hot day so I had to put ice in my bandana to keep me cool but now the sun was going down and it was time to prepare for the night stretch.  I ate dinner and changed my shoes out, my feet looked fine but my left foot was hurting so I gathered my headlamp and replenished my supplies and I was on my way! As soon as I got back out there I felt a hot spot on the ball of my left foot but was able to run a couple of the faster laps that I have done in the last few hours after changing the shoes. Soon enough it was headlamp time. A couple of laps later it was celebration time as I pasted the 50-mile mark which officially made this the furthest than I have ever gone! But I had a long way to go still.

14 hours in is where the trouble started. My left foot kept hurting more and more so I loosened the show laces even more but it did not help. Also the hot spot on the ball of my foot turned into a blister which made running painful so I started walking to see if it would get better. We all know blisters don’t get better, I was too lazy to look at it as it was now dark so I just hoped it would not get any worse. The next few hours were all a blur, I couldn’t run so I tried to walk as fast as possible and I was starting to feel the hours of being on my feet catching up with me but I kept steady and soon enough it was midnight, only 8 more hours to go, hooray! My original plan of dividing the day into 6 hour sections flew out the window and I was now going lap by lap as each one was now taking an hour to do.  I pulled into camp at 2:30am and hit the low point of the day, I sat in my chair feeling cold and miserable. I didn’t eat my meal like I was supposed to and for the first time thought about quitting. One of the reasons I like doing these crazy things is to test myself and I knew before starting today I would have a couple of these moments so I sat in that chair for 15 minutes talking myself into getting back out there. I would like to tell you when I did finally get up and do another lap I felt inspired and proud of myself but when I came back in I wanted to quit even more. This time I had to sit in that chair for 30min. I tried to take a quick nap but could not but I had a plan: I knew if I started the next lap at 4:15am the sun would be coming up before I finished it and I was hoping that would give me the boost needed to finish this damn thing. 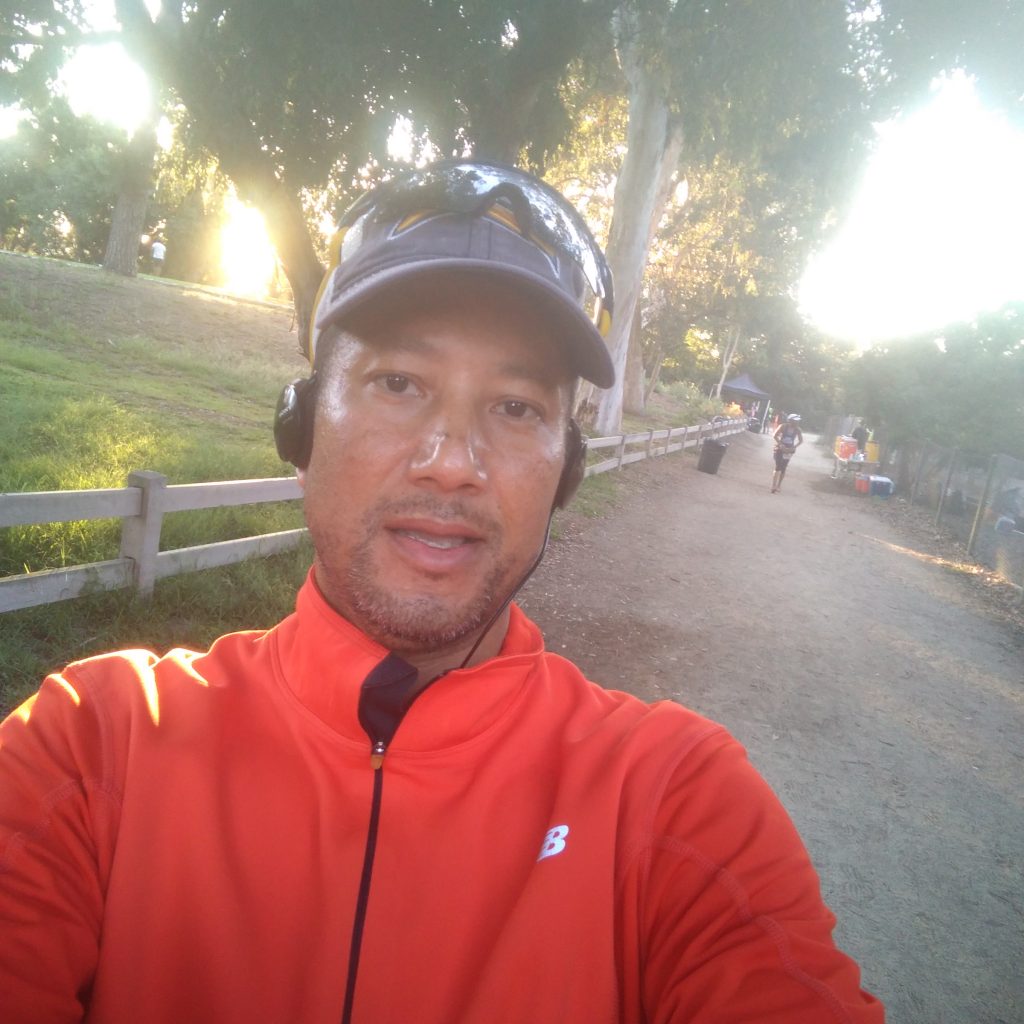 I have never saw a more wonderful thing and felt such hope in my life that when dawn finally came, I know at that point that I was going to be able to complete this. It didn’t matter that I was almost limping at this point and I also developed some major chafing issues down there (TMI) even with re applying lube all throughout the day and night. One funny thing happened at this point; Nancy the RD came out to the start finish and let everyone know that if they were within 10 miles of getting to 100 miles they could keep going as she would give us 3 more hours to do it. I looked at her like she was insane but I could see doing it if you were close. I was not so I counted down the laps and finally completed my last lap at 7:15am! Since this race only counted full laps and it was taking me an hour to do a lap I called my race complete. I made it to 70 miles and never felt so relieved in my life. 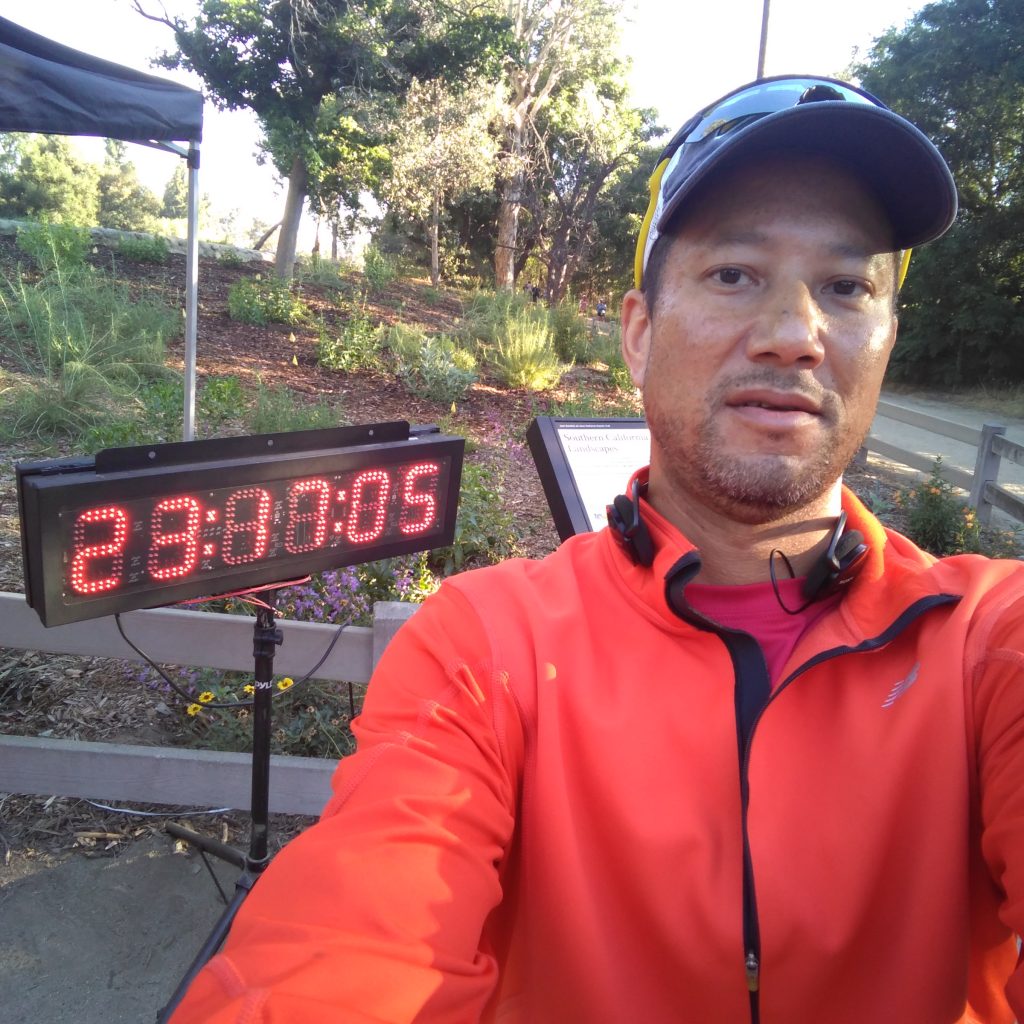 I limped over to my camp and made the painful treks to my car to load up. Thankfully I only needed 2 trips and my car was only about 200 yards away. I was in too much pain to stay to the 8am finish time so I drove home to assess the damage that I have done to myself. When I took my shoe off the top of my left foot was swollen like a golf ball cut in half and the blister on the bottom of my foot was the size of a 50 cent piece, I couldn’t believe I kept going with that kind of damage and hoped it wasn’t a major injury as that is the last thing I needed. 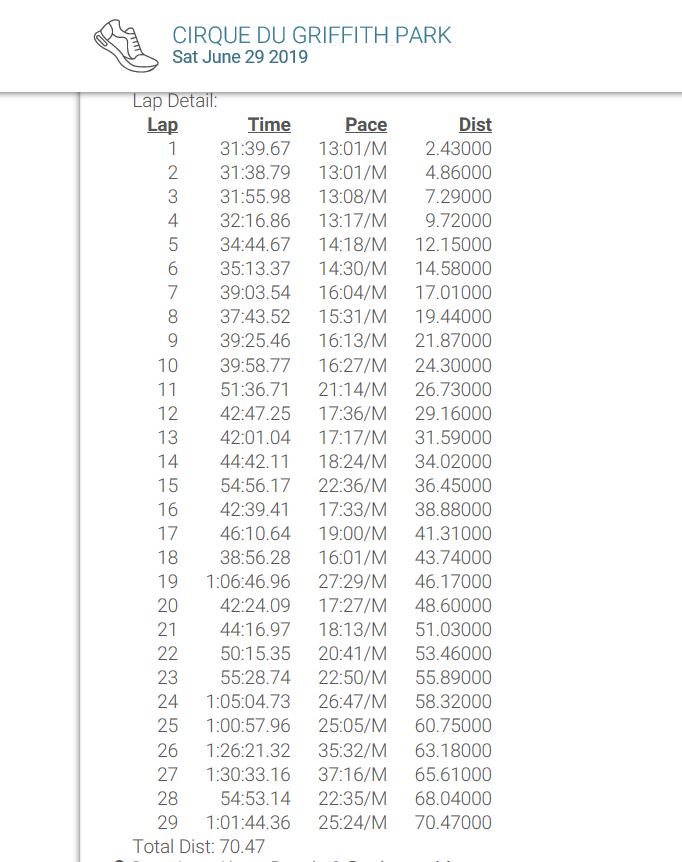 All in all, I counted this as an amazing experience, if it was not for my foot issues I think I could have gotten close to 85 or 90 miles. All of this with less than optimal training. I still do not know why my foot swelled up like it did, it could have been the shoes or a lack of training miles I’m thinking. The blister was most likely due to a poor sock choice, I used some hiking socks instead of my running ones. To address the chafing issues next time, I need to go with some compression shorts under my running shorts and a different brand of lube. Nutrition wise I did really well and never ran out of energy, I made sure to eat one gel every hour and eat some real food also.

So basically that last paragraph says that yes, I’m going to try this again as now I am range of that magical number 100. If I could pull of 70 miles with minimal training and having to walk for the last 10 hours, I think I have a shot.

Lastly I would like to thank the whole Trail Run Events crew for putting on this great event and all of the other participants who made it a great day. 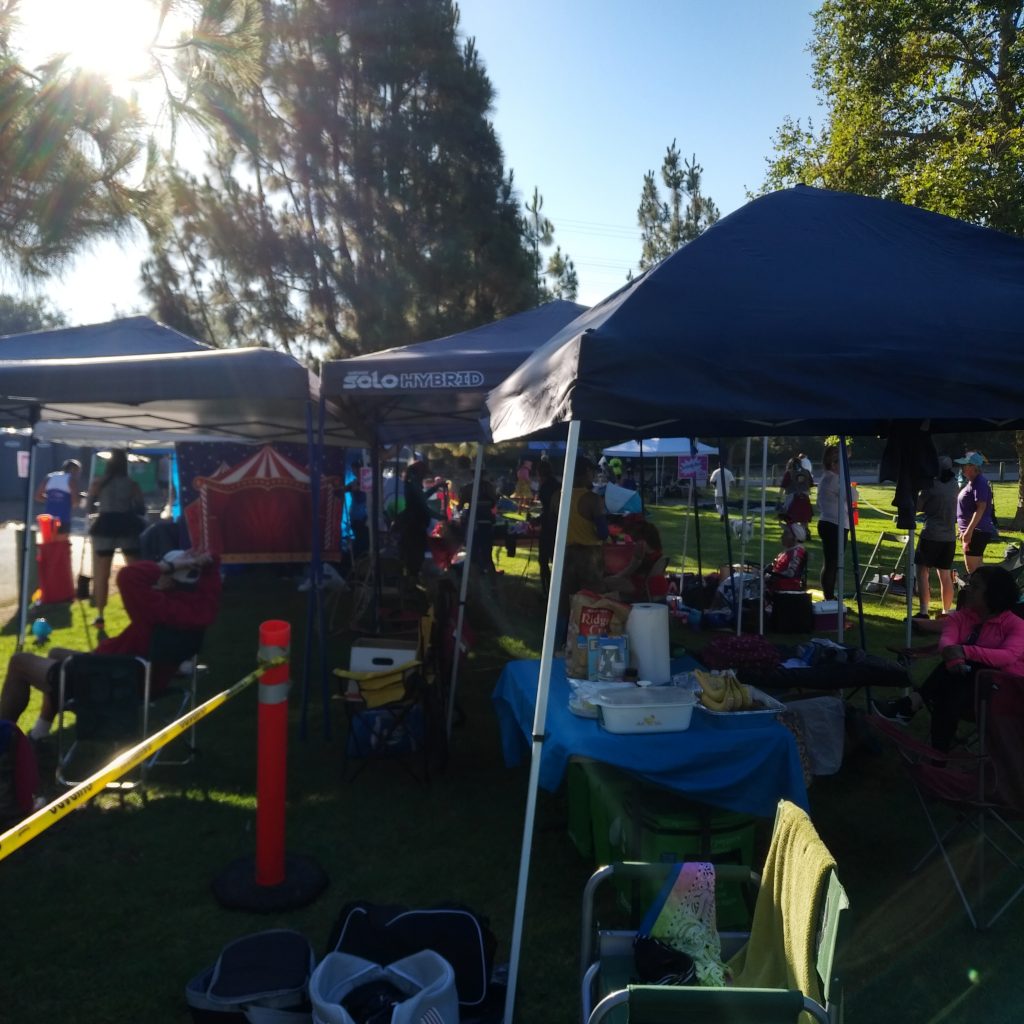 It takes a village to put on a 24hr event