What’s up everyone! here is my race report from the Griffith Park Trail Marathon that I ran in on Saturday March 3rd 2018! Enjoy.

This race is run on the many trails in Griffith Park with a lot of hills. You get to go to both the observatory and the Hollywood sign as a bonus as well as run through the old zoo which was also the start finish area. On Friday it rained all day so I was worried about how Saturday would be but when I woke up it was cloudy and not raining so as I left my house at 5am to pick up Andrew who decided to run this race on a whim without any training. We got to GP at 6am right when the 50ker’s took off and after we picked up our bibs and shirts and went back to my car as it was cold but still not raining. At about 7 we walked up to the start line and the RD counted down from 10 and we were off. That is one of the cool things about trail races, no big show or taking 15 minutes to start, it’s just 1.2.3 GO! The first few miles were on fire roads that went first through the old zoo and the up and around the eastern edge of the park with wonderful views of the gridlocked 5 fwy (haha). At about 3-4 miles in the rain started but it was light and actually nice to run in. around the 5 mile point we ran down right next to the Greek Theater and then up to the ridge above the GP Observatory. We then had to run down to the observatory parking lot and back up as the RD said the course was short last year so she added this little part for us marathoners, how nice of her! From here we started toward the Hollywood Sign, the rain started picking up as we hit a single track section I will call the mud section. All of the runners ahead were telling us how bad a ½ mile section was and boy were they right. Just when it rained the hardest I had to hike through 6inch deep mud and it was the slippery kind which made for slow going. Finally, after making it out the steep climb up to the Hollywood sign was a relief in comparison. It was foggy at the top so I couldn’t really see the sign but I have hiked here many times so no big deal. Now I had to turn around and go back through the mud bog for a second time, Yippee!  By this time Andrew was somewhere way in front of me and my ankle started to hurt (I hurt it 2 weeks ago doing my crazy run 100 miles in a week challenge) so with LA coming up I slowed it down and tried not to injure it anymore. 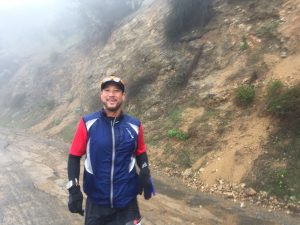 This course is an out and back so back I ran toward the start/finish area, by this time the rain stopped and we were treated with clear blue sky, you could see the ocean, downtown and even a blimp! Too bad I do not carry my phone during most races or I would have gotten some good pics so you will just have to trust me on this. Once we got near the finish area it was at mile 21 so we had to run past the finish area and keep going for another out and back. That was the hardest part of the whole race for sure since you could hear people finishing but you had to keep on going. Right before the last turn around I saw Andrew coming the other way, too bad I had another quarter mile to go. The couple of miles after the turn around were the hardest for me as my ankle really was hurting but I finally made it to the finish! Andrew came in around 10 min ahead of me, pretty good for someone who signed up on a whim (I only hate him a little, JK)

They put 2 (?) medals around my neck and handed me a glass also which was cool. They had pizza which was double cool but this race being in a park there was no beer (boo). All in all, it was an awesome race, I really liked the course (except the mud part) and the rain actually made it better. Yeah I might of kind of ruined my LA Marathon time goals with the last couple of weeks but I’m not really caring too much. I am just going to run a bunch or short runs for the next 2 weeks and hope my ankle heals so we shall see. Til next time, SEE YA! 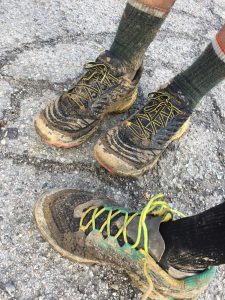